died a couple weeks ago.  His loss was fresh in the mind of those at Grey Fox Bluegrass festival, and one album that was mentioned repeatedly was Kenny Baker Plays Bill Monroe. I try not to read or comment on other reviews of albums, but the Allmusic description of


Much is made of Bill Monroe

's presence on the album, and hey - he's a legend, and any time you can get Big Mon to play on an record, it's a win.  But let's face it - this is Kenny Baker's show.  What's amazing is how tasteful he is.  In a whole album of fiddling, there isn't a single self-indulgent note.  Even a blistered-fingers romp like "Monroe's Hornpipe" or "Wheel Hoss" feels like Baker playing the tune rather than showing off mile-a-minute virtuosity.  Gentler tunes, like "Lonesome Midnight Waltz," are almost elegant.  And "Jerusalem Ridge," which features both some mile-a-minute sections and some haunting minor key passages, has for good reason come to be associated with Baker even more than Monroe.


Baker is a masterful player of tunes, not an interpreter.  There are no seven-minute jams here that lose the melody only to find it again; the longest track is just over four minutes and most are in the two-and-a-half range.  It's professional; each song is fiddle - banjo or mandolin - fiddle again.  That could be read as a criticism, but it's refreshing here; the tunes feel almost perfect the way they are, and any frills would just unnecessary.  The final tune, "Ashland Breakdown," is a microcosm of the album; Baker takes a melodious break, full of long bow strokes and double-stops, then Monroe takes a typically excellent break, followed by a final Baker solo, which ends suddenly on a double stop, as the rhythm backing falls out.  It feels like it ends too soon.
Posted by Dave Archibald at 9:46 PM No comments:

the break-out band of this year's Grey Fox, and they did not disappoint in their late pre-release show for their forthcoming album, I Built This Heart. Even the minor criticism I had of their Grey Fox set - that the guitar breaks of newcomer Courtney Hartman were too quiet and disrupted the group's dynamics - were addressed; her skillful solos sounded great and did not disrupt the group's dynamics.  The group was all loose and lively, it being their second set of the evening.  Most of the songs were originals by lead singer / rhythm guitarist Celia Woodsmith, but the group also played some covers - Bill Monroe's "Muleskinner Blues," Hank Williams' "Hey, Good-Lookin,'" and Flatt & Scruggs' "Big Spike Hammer," from which the group gets its name.  The originals stole the show, though, from the bouncy "Jamie Dear" to the dark "From the Bottle" to the delicate "I Built This Heart."  Woodsmith sings with a passion rare in bluegrass music, and the rest of the group - bassist Amanda Kowalski, fiddler Kimber Ludiker, and mandolinist Jenni Lyn Gardner - were matching her intensity with their playing.

and Tom Rozum did a short, tasteful set, with their spare two-person sound complementing The Carter Family's "Texas Girl" or original tune "The Oak and the Laurel."  For their last tune, traditional "Ain't Gonna Work Tomorrow," they showed their spry side, bringing Kowalski and Ludiker on to jam.  Later, they joined Della Mae for a few tunes, including a barn-raising version of "Bowling Green."

It was a memorable night; look for a forthcoming preview of Della Mae's new album!

is the solo pop vehicle for Simon Fink, a classically trained composer.  One would think the music would reflect that classical training, but Sargent Egyptian Girl

, his debut album, is more steeped in American rock and pop than Italian arias and German symphonies: the opening finger-picked guitar riff evokes The Replacements' "Unsatisfied"; the guitar solo in "The Dream of Falling" suggests Johnny Cash's "Folsom Prison Blues"; the various "la"s and "bop"s pay homage to pop music from Phil Spector to the Counting Crows.  But the album that this ultimately makes me think of is Wilco's Summerteeth

.  Summerteeth is almost a lost gem, a pop masterpiece nestled between the alt-country of Being There

and the experimental genius of Yankee Hotel Foxtrot

and subsequent albums.  Like Summerteeth, Sargent Egyptian Girl carries both of those influences - "Chocolate Heart" is permeated by fiddle riffs, while "French Lessons" is drenched in effects and synths.  And like Summerteeth, Sargent Egyptian Girl is peopled with perfectly-crafted tunes, with the lyrics, melody, production and deliverable working together.

"Take This Town" is my favorite track on the album, a gorgeous stark tune keyed by gentle acoustic guitar and lyrics that paint a portrait of loneliness and disenchantment.  Another strong track is bubblegum closer "Wet Paint," which features triple entendre lyrics.  "It's about painting a room."  "Wait, it's a metaphor!"  "Wait ... I think it's about painting a room after all."  It's clever and catchy.  The album shows diversity, stretching from the fuzzed out post-relationship recriminations of the title track to the quirky funk of "Coin Star" to the psychedelic melancholy of "Water Border."  It's a strong collection of tunes, and Fink is skilled at several instruments and capturing the essence of the songs in the studio.

Still Lost Bird Music's second album, August, is coming out in about a month.  If Sargent Egyptian Girl is any indication, it will be one to look forward to.

This was my eighth Grey Fox and the festival just keeps getting better.  This year had an embarrassment of riches; it seemed like every time slot had competing acts of great interest.  The downside was that there weren't really any new discoveries this year; who has time for new bands when the bands you know are so awesome?
The death of fiddle great Kenny Baker

was definitely on the minds of many of the artists and fans at the festival.  There was a formal tribute on Friday, but there were many artists who played a Baker tune as a tribute, including three versions of "Jerusalem Ridge."  Friday's fiddle workshop at one point turned into the panelists swapping Kenny Baker stories.

Some highlights through the weekend: 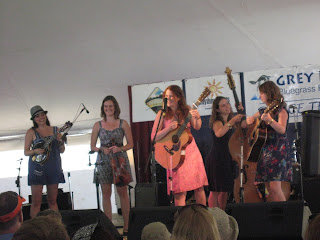 Peter Cooper at The Tennessean wrote a funny column on how fake a lot of country music lyrics are.  I love music with some twang, but mainstream radio country spends a lot of time talking about how country it is.  In a lot of ways it's the opposite side of hip hop's coin (rappers rap about rapping a lot) - for some people, it's more about identification than the music itself.  You see that in the inverse, too - how many folks do you know who say they "like all music, except for country and rap?"
Posted by Dave Archibald at 9:23 PM No comments: